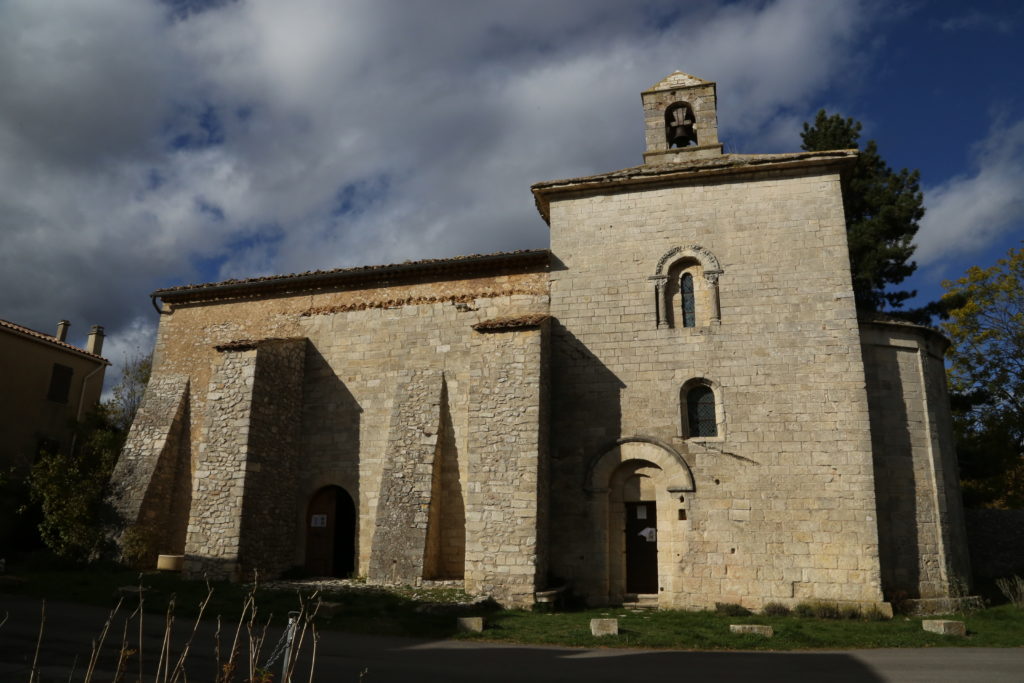 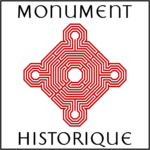 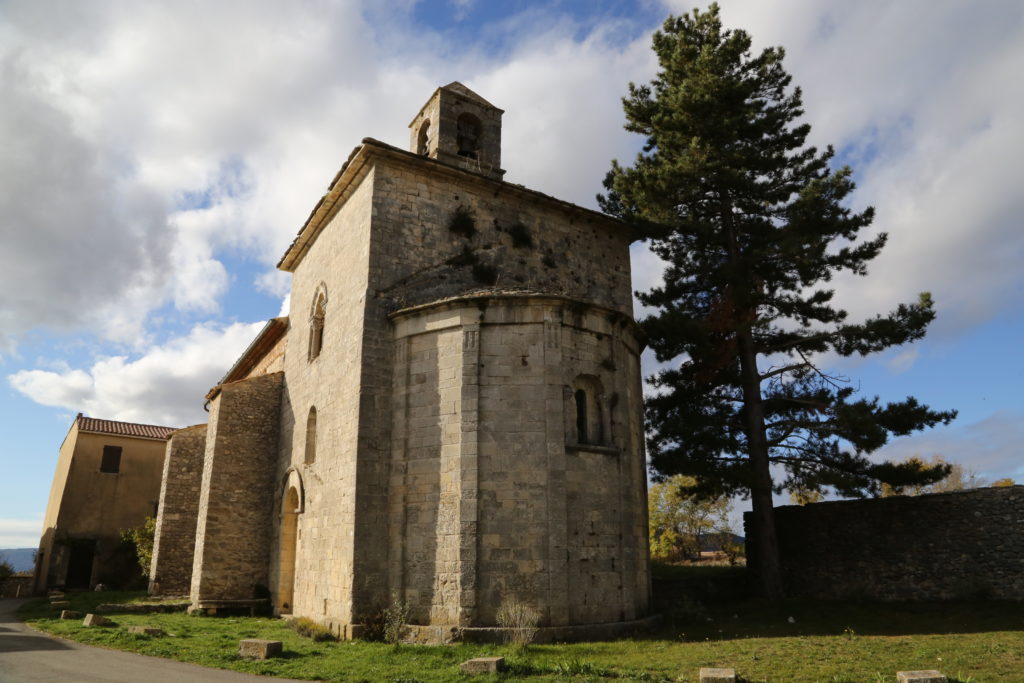 Church of the Holy Trinity, listed monument from the 12th century.
Originally, this priory church consisted of a nave with two bays covered by a semicircular barrel vault, already mentioned in the 11th century, the present building actually dates from the early 12th century. In the 17th century, the building was redesigned with thick buttresses and a pointed arch vault. Later, the nave was extended by one bay, thus removing the original portal. 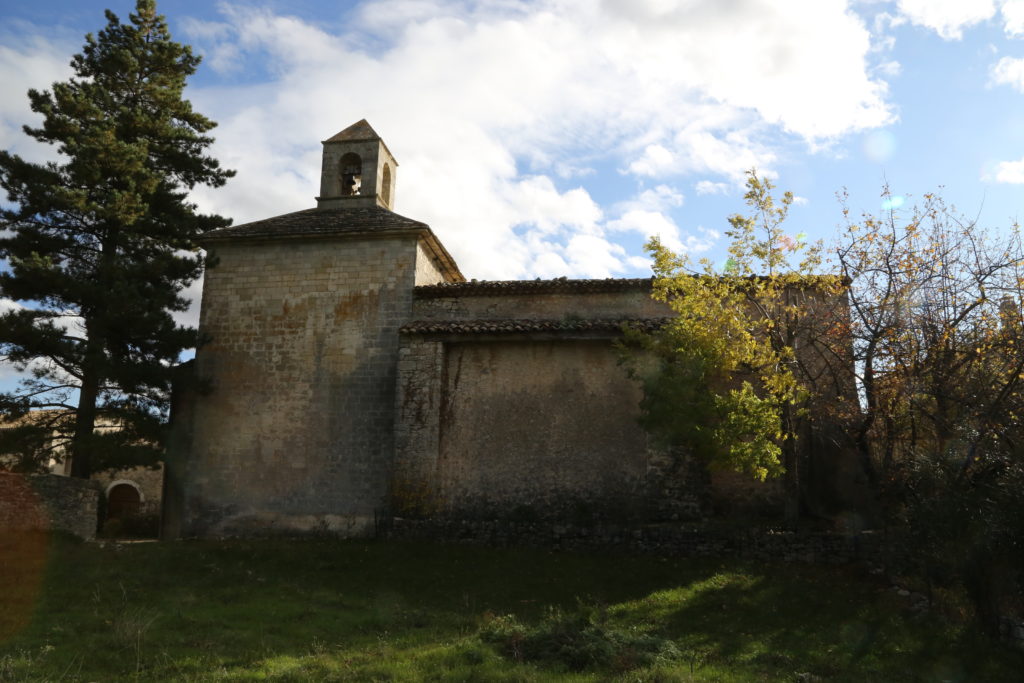 Today it consists of a short nave, a choir bay and a pentagonal apse with a cross vault. A triumphant arch separates the nave from the choir bay.
The decoration of the church of St. Trinit is simple, but each part is highlighted by arches, formets and arcatures as well as by Romanesque friezes and capitals. 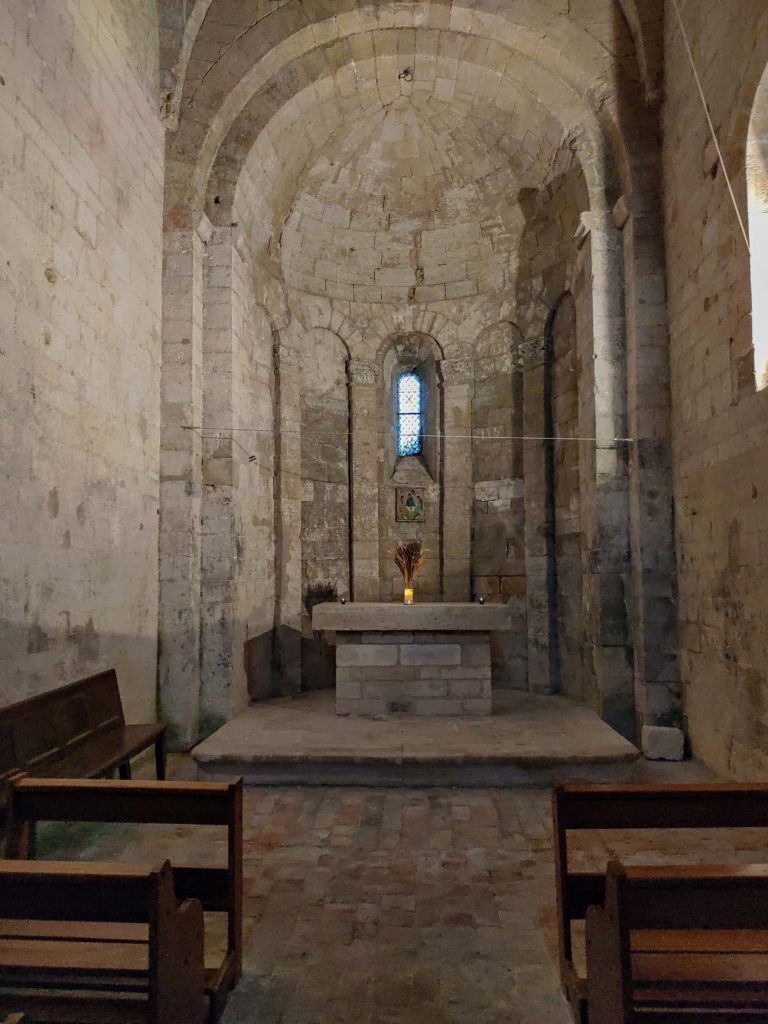 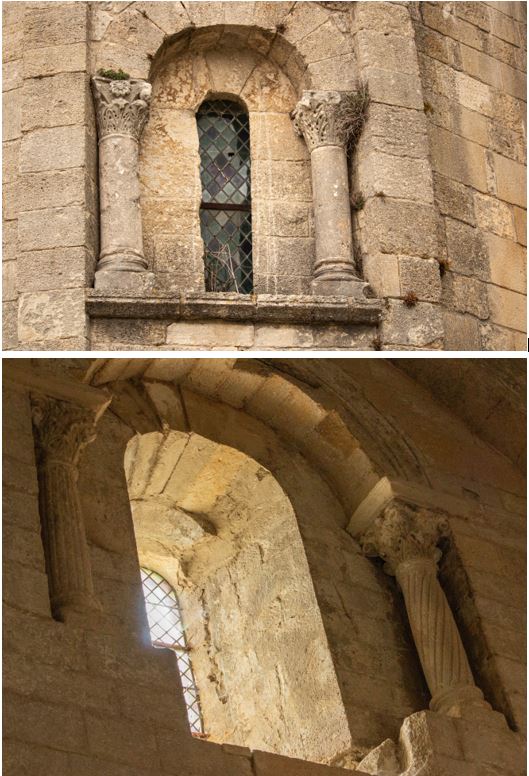 The upper opening in the southern wall is purely Romanesque: it is very splayed and surrounded by columns with Corinthian capitals, both inside and outside the building. 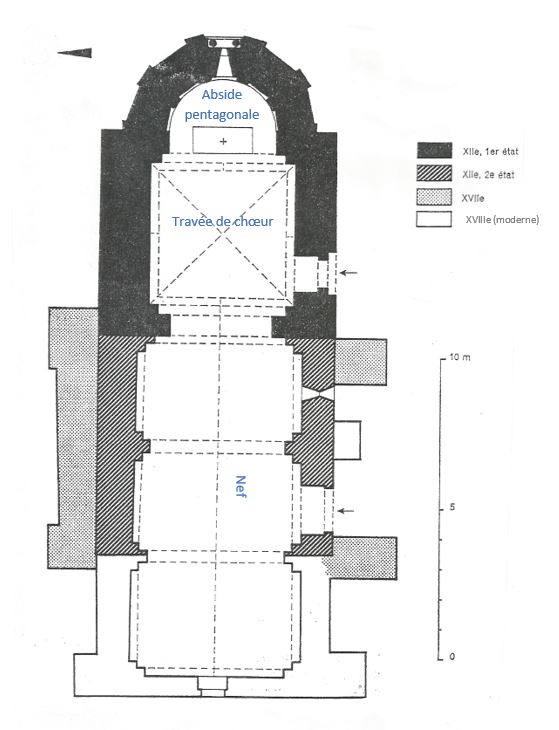 The exterior of the church offers an architecture that combines strength and refinement.
To the east: pentagonal apse, pilasters at the corners, bay set in a niche with columns.
To the west: the keep (choir bay) and the apse were built around 1120-1150, then later (a few decades) come the first two bays of the nave. In 1580, during the Wars of Religion, the building was fortified with a parapet walk and sentry boxes on the roof. These last constructions, too heavy, caused the vault to collapse. In 1652 the present vault was entirely rebuilt, in broken barrel and a little higher than the original roof, and in the 17th century the nave was extended by one bay.
In the centre, dominating the whole, a high square keep topped by a pyramid of slate roofs, topped by a pointed bell tower.

In the choir bay, only two of the four pointed arches that support the vault are decorated with foliage motifs, the arches rest on four consoles where the emblems of the three evangelists can be recognised: the angel Matthew, the bull of Luke, the eagle of John and finally, in the darkest part, a simple cul-de-lampe. Only Mark’s lion is missing. 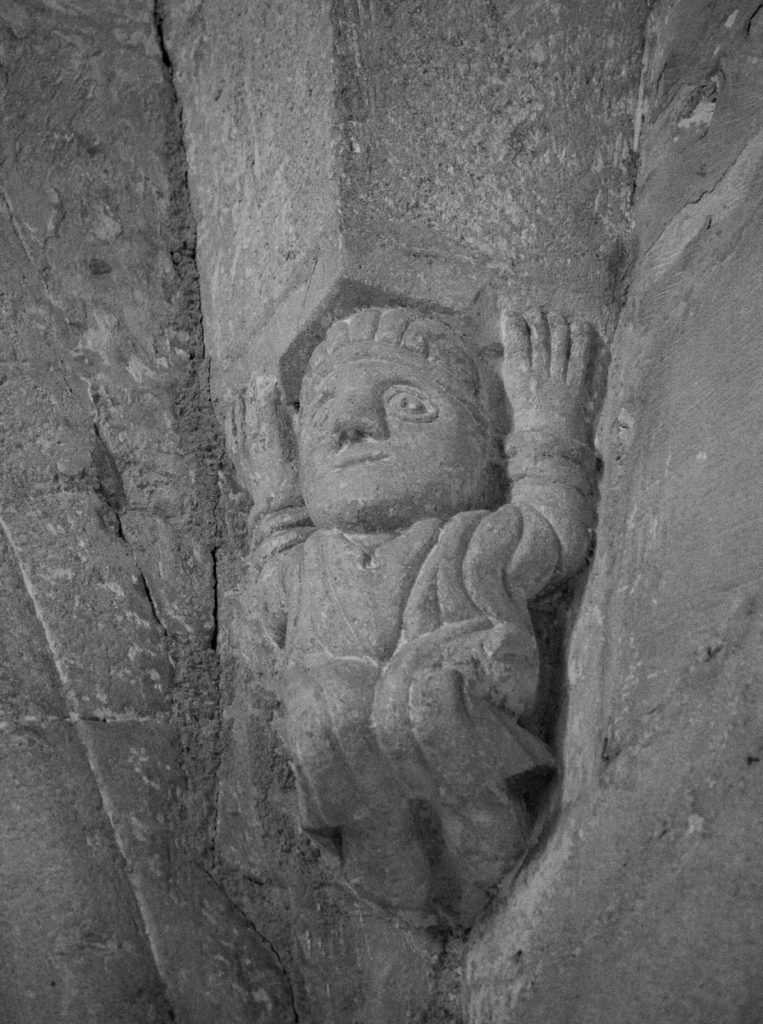 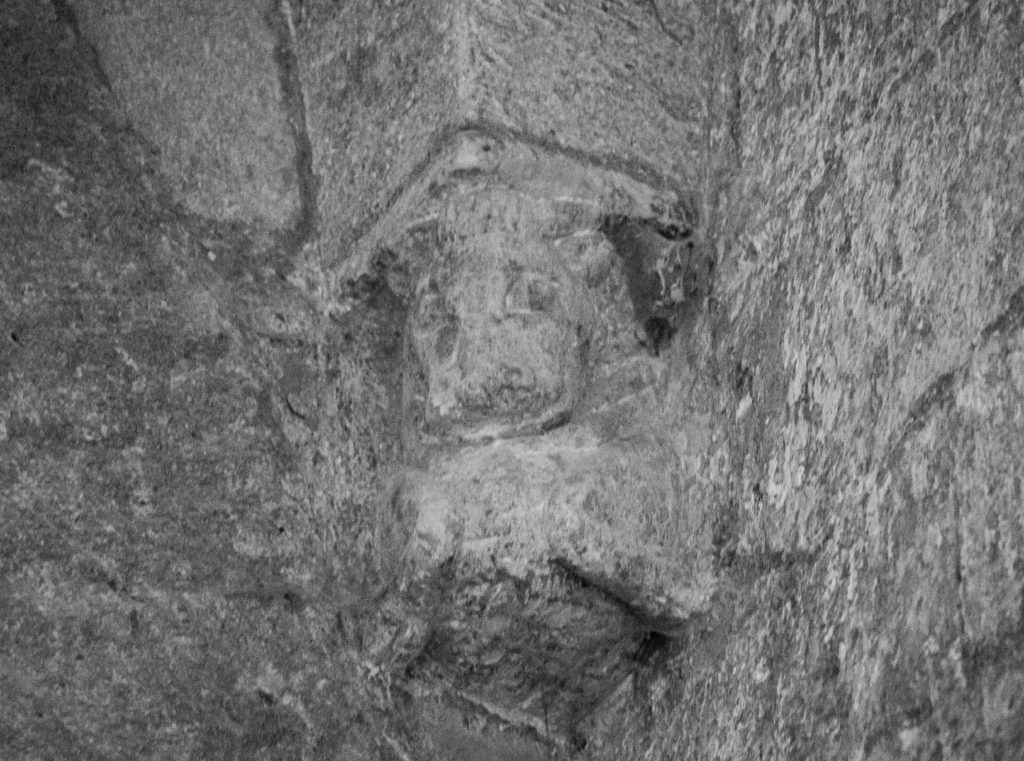 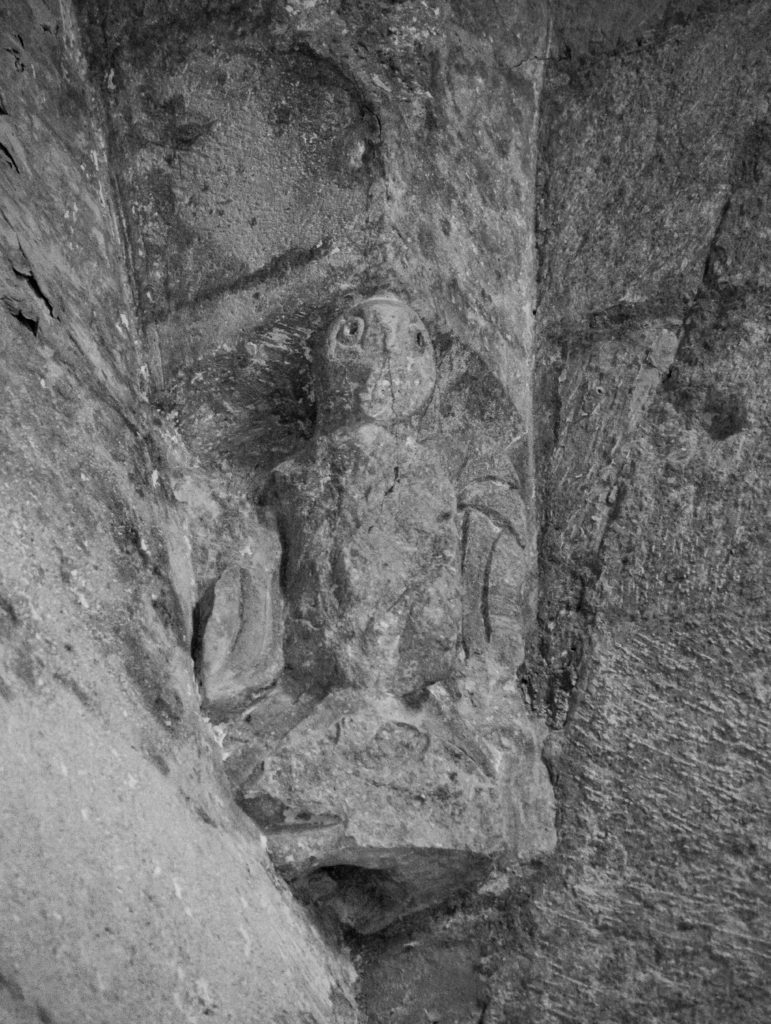 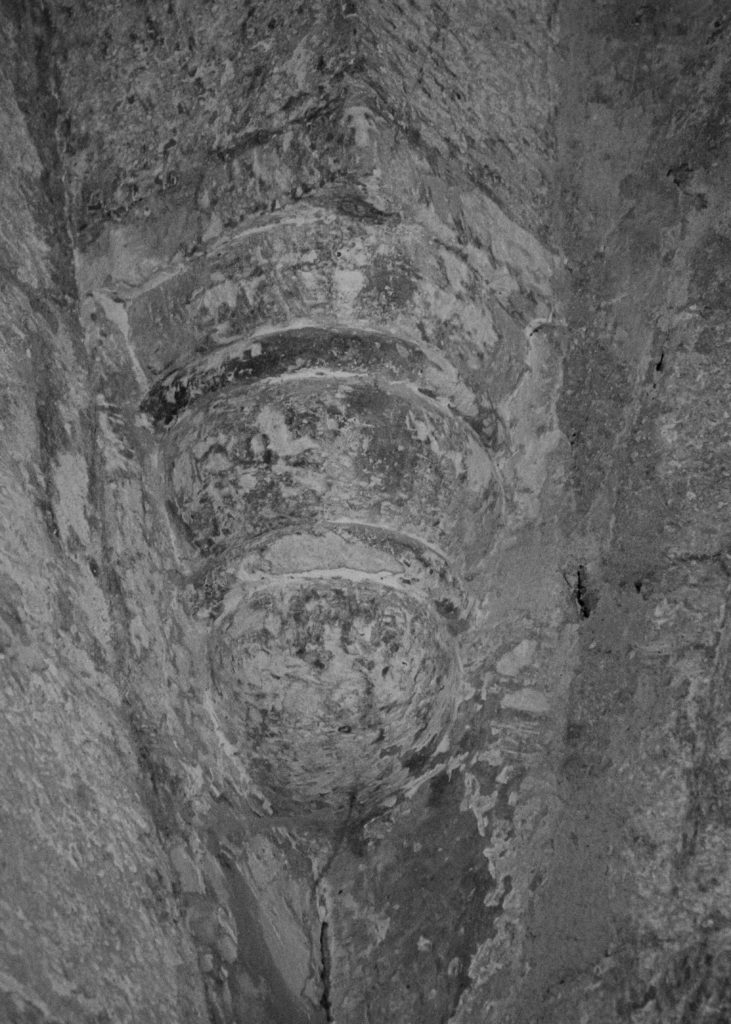 Above the entrance arch of the apse, in the place of honour, but too high to be seen clearly, a rectangular medallion (probably made of marble) represents a theme popular in Haute-Provence (land of sheep farming): “Agnus Dei” the Lamb of God 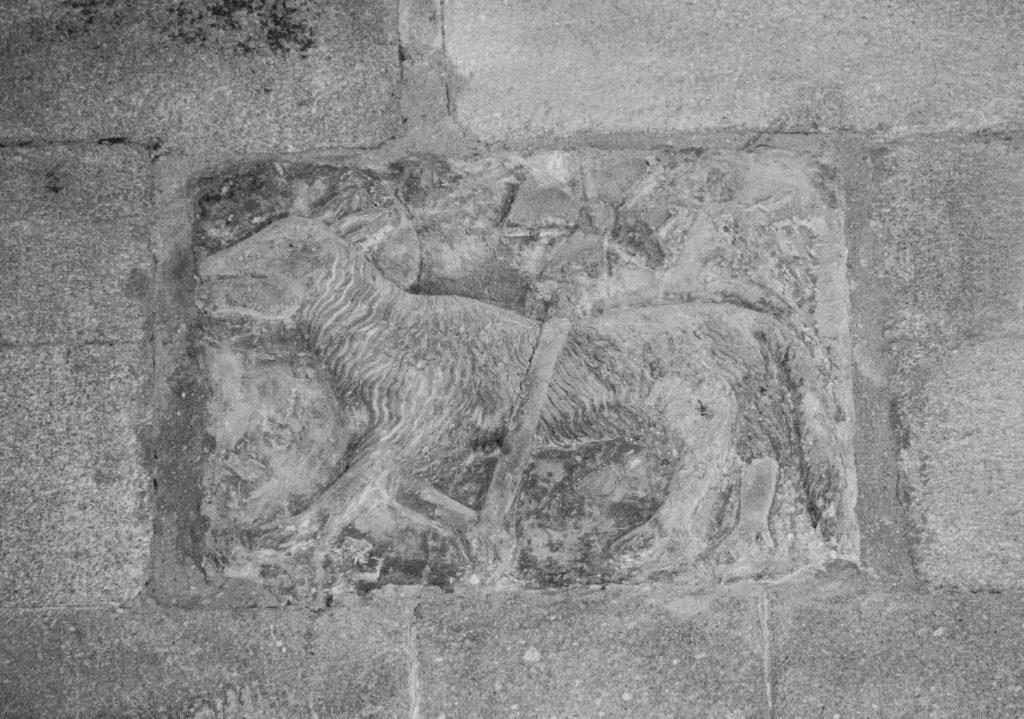 The church was used as an entrenchment camp during the Wars of Religion in the 16th century. The church was thus fortified at roof level (parapet, sentry boxes) and was subsequently badly damaged, which made it necessary to undertake major work in the middle of the 17th century. The vault collapsed under the weight of the additions and was replaced by the present one, which is higher than the original.
Despite all these changes, it retains a certain homogeneity that is pleasing to the eye, especially in its oldest part (choir bay and apse). The last added bay is unattractive, both inside and out.

The Chapel of Saint Roch